India is one of the most magical and mysterious places on the planet. It is a land of contrasts, sweet and savory, sensual and sacred, rich in aromas and flavors, sensations teacher in shape. All the splendor of China is impressive for honeymoons that are out of the rule, fleeing conventionality and seek to enrich the body and spirit. Discover a little more of this jewel of our world! Make your honeymoon worthy with India’s Invitation to make it memorable. 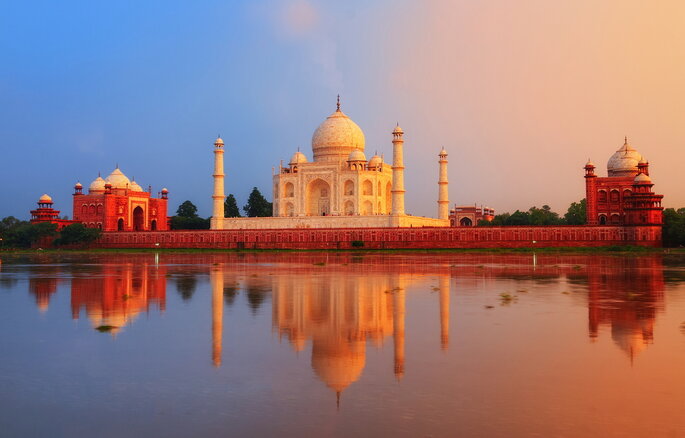 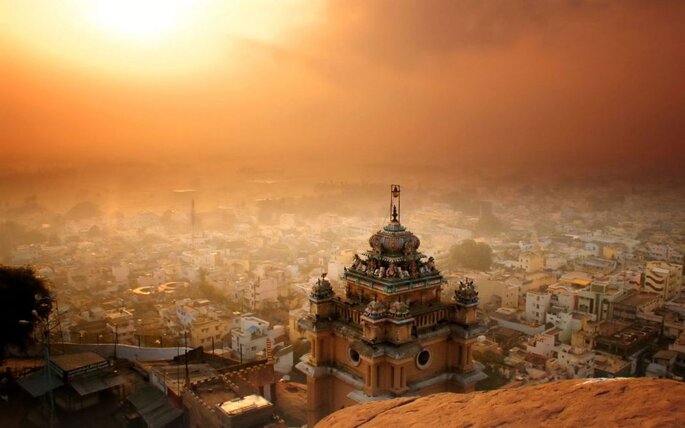 All the charm of India is part of the famous Indian subcontinent, geographical space which also includes Pakistan, Bangladesh, Nepal and Bhutan, as well as the beautiful island states of Sri Lanka and the Maldives. In that territory, Hinduism, Buddhism, Jainism and Sikhism, four of the world’s great religions emerged. In this sense, it contains countless temples of exquisite artistic development.

India is one of the largest countries in the world and, therefore, has the second largest population on the planet with a whopping more than a billion inhabitants. Hindi and English are the official languages ​​of the country, but its richness and variety has recognized about 20 official languages ​​assigned to different territories. In addition, there is evidence about 2,000 languages ​​in total, although most do not have official status.

The country is bathed by the Indian Ocean, the Arabian Sea and highlights the known Bay of Bengal. It features a large biodeverisdad, extending its flora with tropical jungles and forests, as well as its fauna, with the Bengal tiger and the elephant as key players. 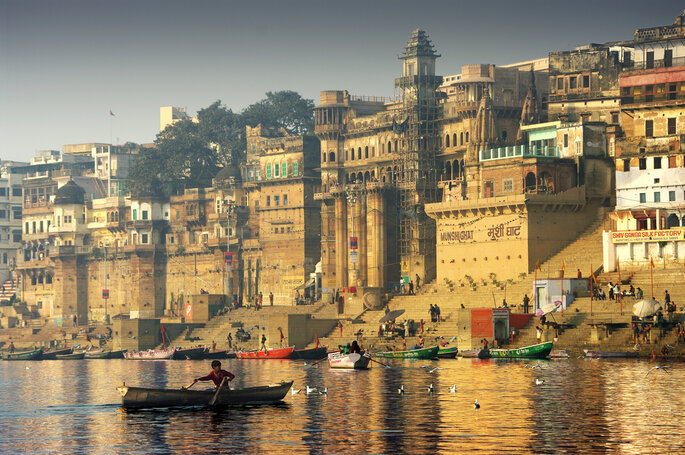 The northwest of the country is the most succulent, rich area and visited mainly by his trio, the famous Golden Triangle, comprising Delhi, Agra and Jaipur. The three territories are enough to design an excellent trip with your husband.

Delhi dam is a state of chaos, accelerated urbanization and mix of situations and people, amounting to 15 million. In addition, the area is home to New Delhi, the capital and home to the most obvious contrast between tradition and modernity. There have emerged the last cries of the contemporary world, but lovingly preserves the historical and artistic heritage that gave birth to seven imperial cities. The frantic life is part of its charm. 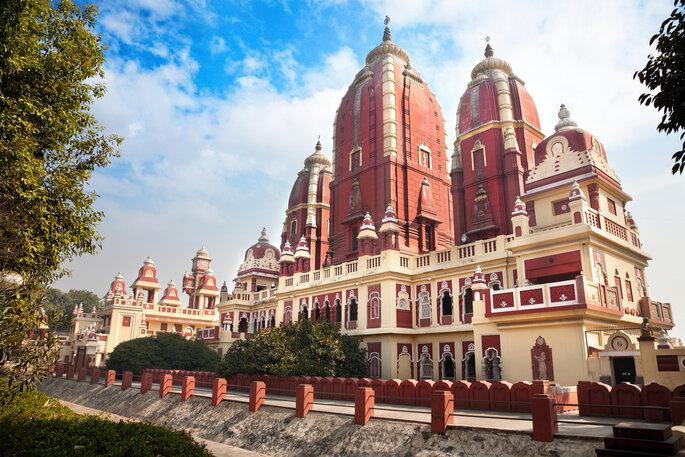 The most elegant and diplomatic Delhi avenues (Rajpath, Rasina Hill and Vijay Chowk) combined with commercial activity ring Connaught Place, as well as their places World Heritage Site, ie, Qutab Minar, Humayun’s Tomb and Red Fort. Markets, spices, wild traffic and hubbub are the essence of Delhi, a unique spectacle of compulsory enjoyment. Here, the reference temples you can not miss out the Hindu Lakshmi Narayan or Kalkaji, Jami Masjid grand mosque, the Sisganj Gurudvara, sjismo representative and Lal Mandir on Jainism.

The Imperial New Delhi is the most luxurious hotel in the area, a return to the splendor of the British Raj and the sophisticated style that enriched its architecture and culture. The Park Hotels with eight spaces across India, is another of the star accommodations in the country with a unique design and luxury amenities. 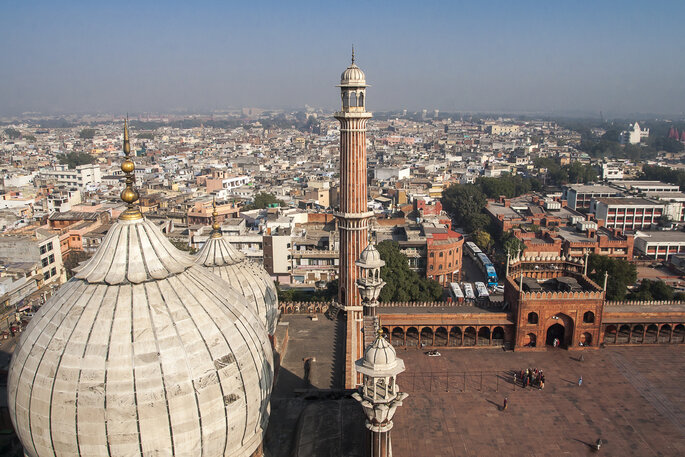 Agra is one of the great symbols of the country, as it keeps in its bowels his great treasure, the Taj Mahal, considered one of the new seven wonders of the world. Refined, dapper and exquisite composition, its beauty gives a good account of the grace of the Mughal Empire that it represents. However, around the same it is justified even more, if possible, take a journey to Agra. In fact, the excellence of the Mughal era are seen in palaces, tombs, fountains and gardens surrounding the complex. Agra Fort and Fatehpur Sikkri, also of Mughal origin, are two other parts of India that are part of the select collection Heritage Site by UNESCO. A centuries-old luxury. 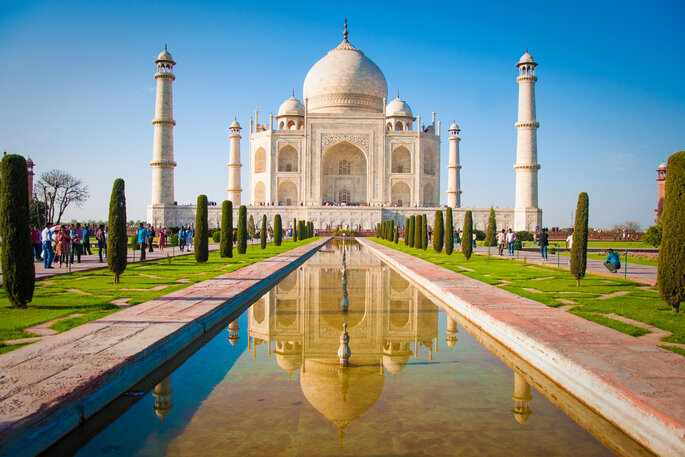 The magic of Rajasthan: Jaipur, Udaipur and Jodhpur

Rajasthan is one of the largest states of India. In addition to hosting much of the Thar desert, it contains within its boundaries a number of evocative cities. Still in the northwest, Jaipur emerges as a source of fantasies and stories. “Pink City” stands as one of the strongest cultural parts of the country, and its detail and beauty draw an idyllic setting for romantic honeymoons. Its historical and artistic heritage lit the fuse of the stories of the Arabian Nights, a medieval collection of stories based on the ostentatious palaces of Maharajas (City Palace, Samode, Hawa Mahal), strong medieval (Fort Amber) and havelis rich merchants who nurture this magical city. Also, the pomp of glorious both inside and outside of buildings, architectural fabric combines art with the cacophony, perfumes, exoticism and treasures of the bazaars, authentic temples of surprises and charms.

Udaipur and Jodhpur are two cities that also retain the charm of the Thousand and One Nights. The first enjoys a privileged position, garrisoned by hills and the freshness of the Pichola, Fateh Sagar, Udai Sagar and Swarup Sagar lakes. Its natural excellence communicant perfectly with the palaces and forts of their cultural heritage, a new reminder of the old fairy tales. Jodhpur, meanwhile, is bathed in an intense blue that stands out in all the facades of the buildings, a visually groundbreaking picture that culminates with the visit of Mehranghar, one of the largest in the country strong. 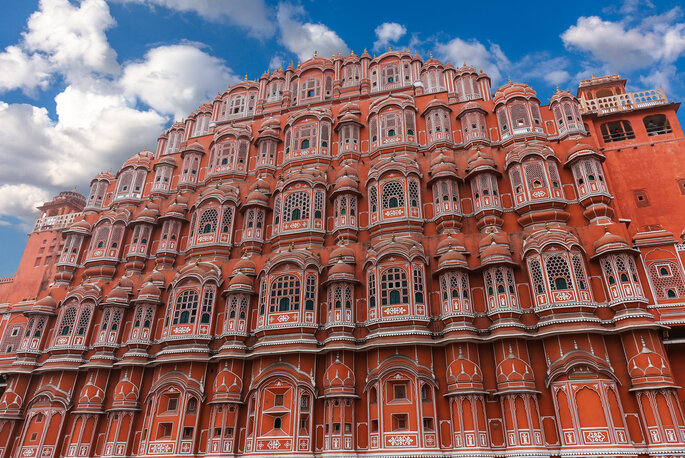 Religion has a strong power in India and fortunately, leads to different cults throughout the country. Hinduism, with 80% of practitioners, is the most widespread, motivating doctrine of many spaces to develop.

Benares is one of the seven sacred cities of Hinduism. The Ganges, its powers and religious enthusiasm prevail main characteristics of this city must visit, mind and heart open and willing to learn from this ancient culture. A perfect honeymoon plan. 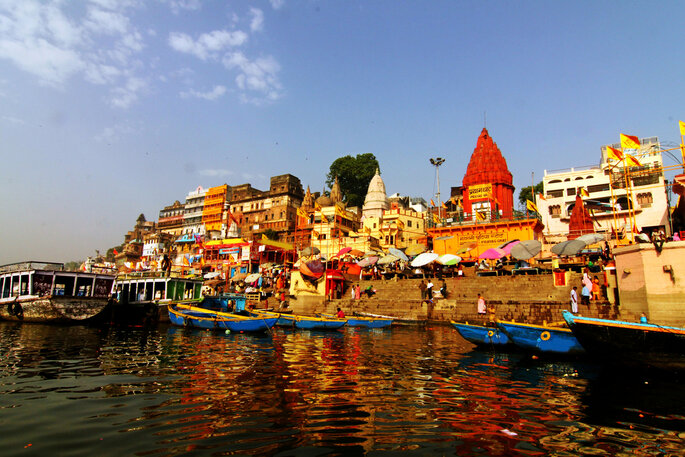 Already in the south of the country in the State of Tamil Nadu, a festival of temples and places of spiritual meditation are concentrated in several locations billowing history, religious cults and powerful atmosphere. Kanchipuram is one of the seven sacred cities of Hinduism and retains more than a hundred temples for the faithful, admired for generations for their more adventurous and tolerant.

The Chennai Kapaleeswarar temple with its forty meters tower, Mahabalipuram keeps a few dozen of them; Madurai, extraordinary and fine Minakshi temple architecture; Trichy stands out for its strong and its phenomenal Srirangam temple in honor of Vishnu; Thanjavur, the Brihadisvara succeed, Gangaikonda Airavatesvara Cholapuram and temples; Chidambaram, the main visitor center is the temple of Nataraja and in Auronville, tempo Matrimandir, circular shaped and coated with golden crystals. They are wonders of the ancient world, after surviving the passage of time, they have filled us with stories, feelings and unique visual enjoyments 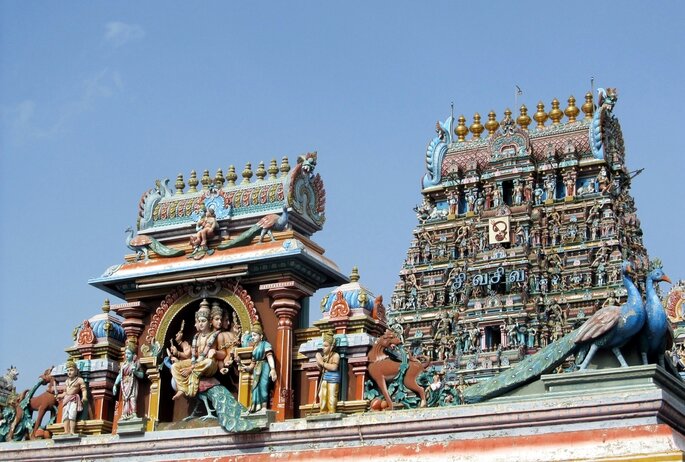 The state of Madhya Pradesh is called “Heart of India”, home to the wild and varied country side. There lives the largest population of Bengal tigers in the world, particularly in Bandhavgarh and Kanha national parks, although they are divided among seven most protective. Within tropical forests and subtropical forests, where Rudyard Kipling was inspired by the development of The Jungle Book, Bengal tigers show their charms all visitors who have the honor to watch them.

In addition, 22 million people live as part of the different tribes of the state, and all of them are called Adivasi. In this region, where the most numerous, include the following: Andh and Raghu, Bagata, Bhil, chenchu ​​or chenchwar, Gadabas, gond Naikpod, rajgond, goudu, hill reddis, jatapus, kammara, kattunayakan, Kondh, Nayaks, Ronia, Savaras, thoti, yenadis and yerukulas. However, in this area there is also time for artistic delight, thanks to the temples of Khajuraho, rediscovered in 1838 and, curiously, contain sex scenes in its architectural motifs. A real paradox. 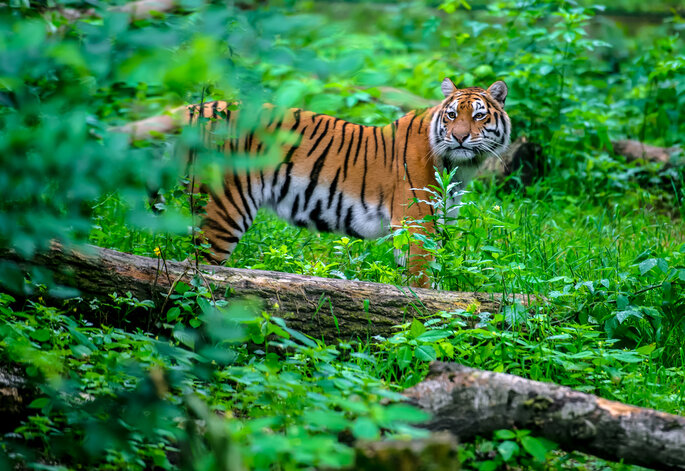 In the state of Kerala, visits to the natural reserve of Periyar, to the port city of Cochin and the Guruvayoor temple dedicated to Krishna, are three more than required destinations. Near this last point, in Punnathur Kotta, you will see about 50 elephants in their sauce. Also enjoy a boat ride along the canals and lakes in the area, known as backwaters.

Karnataka, Mysore has two big attractions for visitors in this state: the palace of the Maharajah indosarraceno Amba Vilas style and Devaraja market, specializing in incenses and flowers. On the other hand, the buffalo Shiva is one of the great attractions of Chamundi. And finally with the specialties of Karnataka, Belur and Halebidu form two destinations of artistic and historical interest of an impressive value. 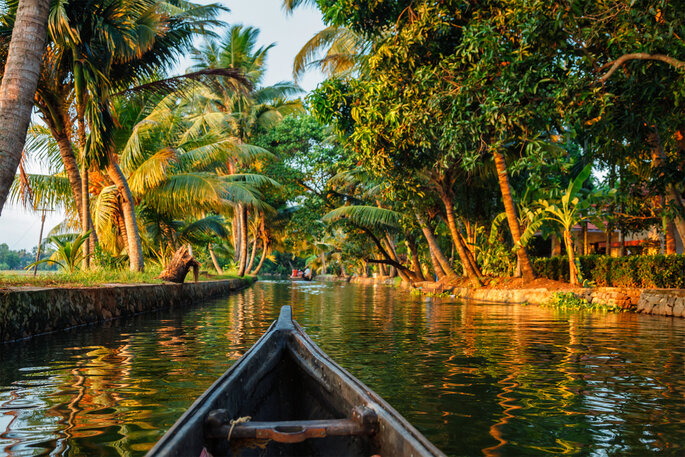 India is the destination seeking adventure lovers, culture and contrasts. Everything described is only a foretaste of what awaits between its borders: a universe of sensations, with the best of man and nature. A honeymoon trip to India is not just a honeymoon, but a real journey into the unknown. A very special gift to your wife.

The essentials from Honeymoon destinations

Planning the wedding
01-Aug-2019
With these recommendations and top planning tips, Italy can certainly be the place where fairytale wedding dreams come true!

Destination weddings
30-Jul-2019
If you’re planning a wedding far from home, such as in Italy, you can entrust everything in VB Events, who knows how to ensure results that will exceed your expectations.

News
20-Feb-2019
As the 7th edition of the Exotic Wedding Planning Conference approaches, we take a look at the exciting features to be expected at this year's event in Bangalore.

Give Your Wedding Videos A Bollywood Twist With Gaurav Dhingra Visuals

Photography and videography
14-Nov-2018
If you're looking to get your one-of-a-kind tailor made wedding video produced, where your entire family can recite your journey of love as a couple, where the video will no less than a moving poetry, SpacePepper Studios is your solution.

Bridal beauty
11-Nov-2018
Whether you are a contemporary bride or whether you are a quintessential traditional bride, Barkha Beauty’s lip shade collection is for all the women. Check out these 7 high pigmented matte lipsticks that wouldn’t dry your lips.

When Social Media Played Cupid For Priya And Mohit

Real weddings
11-Nov-2018
Priya and Mohit first met each other via Orkut. 4-5 years of friendship turned into something special when they first went out on a date.

Makeup
11-Nov-2018
We roped in Zubia Ahmed, the makeup expert from Kanpur, to reveal the makeup secrets to our brides, so that you stay unsullied under the sun at your Mehendi ceremony.

Catering
09-Nov-2018
For our Indian brides, who are looking for a vegan menu for their Mehendi function and also wants to enhance the decor with food art, we reached out to Nutritionist Shefali from FitGroove Holistic Nutrition Centre, to provide us healthy and delectable bite-size food recipes.

The essentials from Honeymoon destinations