Aanchal & Shray, the couple who met just 15 days before their engagement, surprisingly beguiled each other during this short time-span. Though, at first, Aanchal never wanted to leave India to settle in Australia with Shray, fate has already decided its course for her. So, in hope that her excuses would call off the wedding, when she saw his pictures, she found as many reasons as possible to reject him.

When Shray didn’t call Aanchal on the specific day they were supposed to talk, Aanchal concluded that even the guy wasn’t interested in her; that of course made her happy. But as they say, if you’re meant to be together then you are meant to be together. Out of the blue, Shray called her after two weeks and that very moment they knew, this was it. Shray tried to pull off an Australian accent, and the spontaneous bride Aanchal left no time in pouncing on him with the most sarcastic one liners. Shray played along and had better come backs according to the bride. They just laughed and teased each other the whole time during their conversation, and Aanchal was pretty much impressed with Shray’s sense of humor and personality.

When Shray flew down from Australia to India, they spent some time together. Shray had already planned a proposal for the bride, and when she went to the washroom, he grabbed the opportunity and prepared everything. When she came back, Shray was on his knees with a toy ring in his hand. Aanchal being Aanchal nudged him for not getting a real ring. “As we have a relationship which is all about pulling each other’s leg, I said not with that ring. He’s like since I’m going back in 7 days I have given the real ring to the jewellers so just wear it for now”, says the bride.

The beautiful photography is done by Happy Frames Photography. 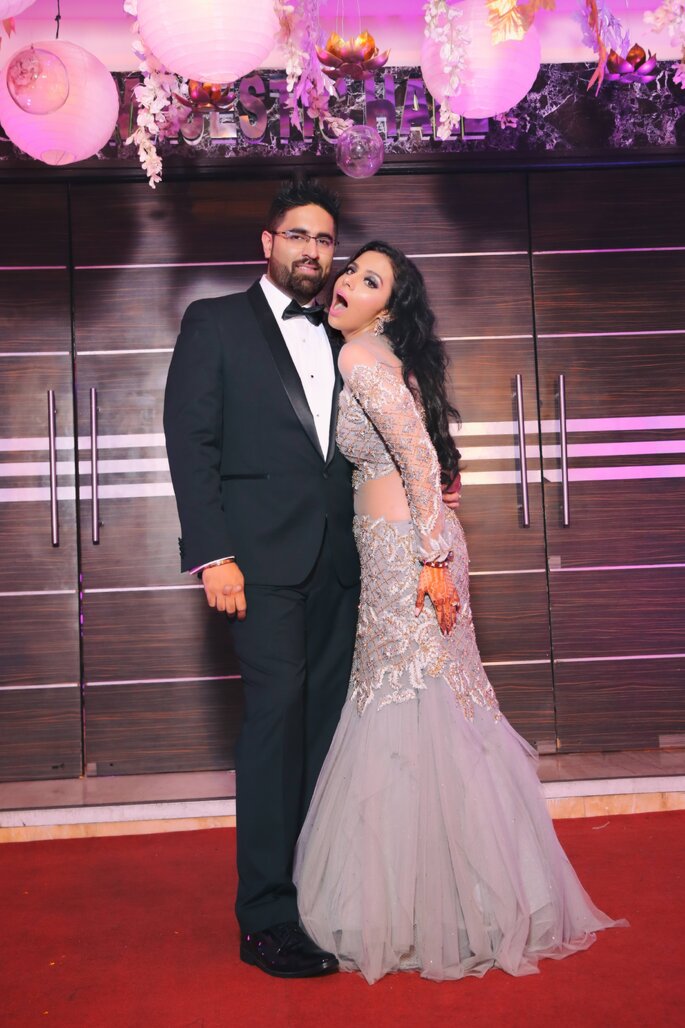 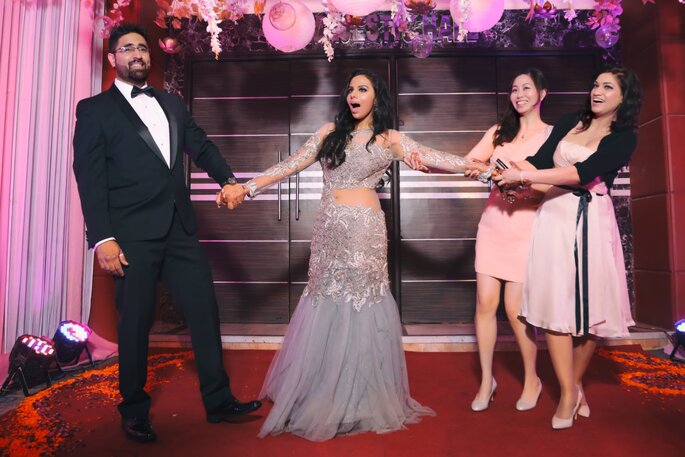 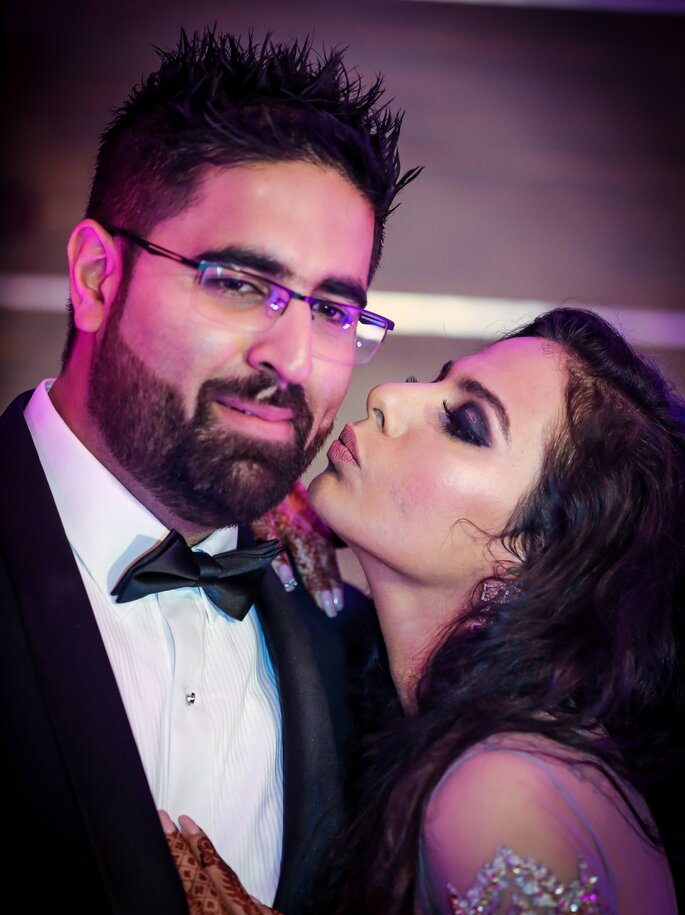 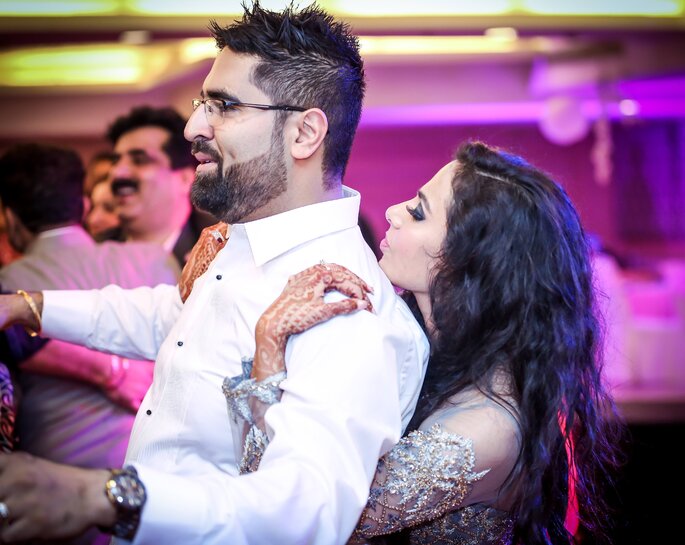 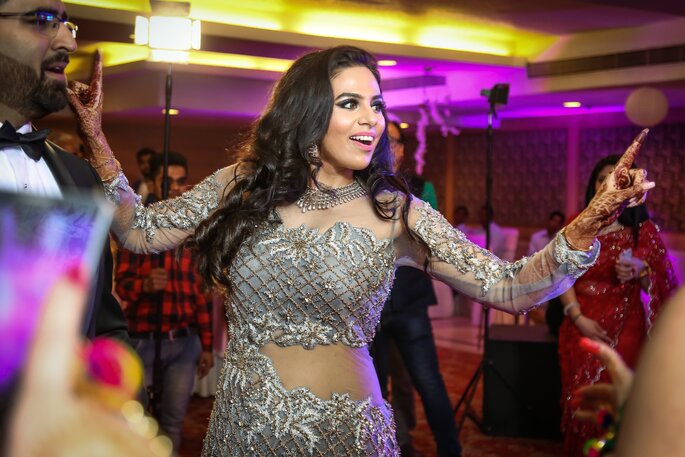 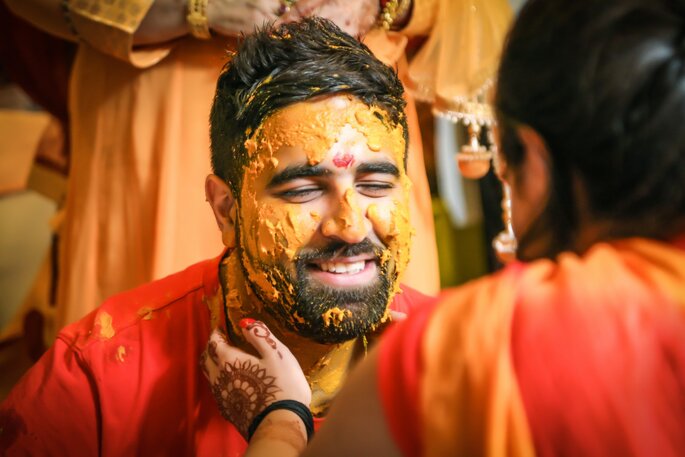 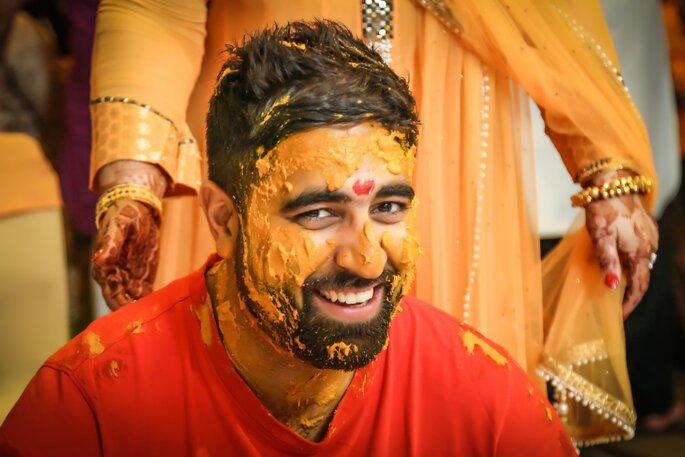 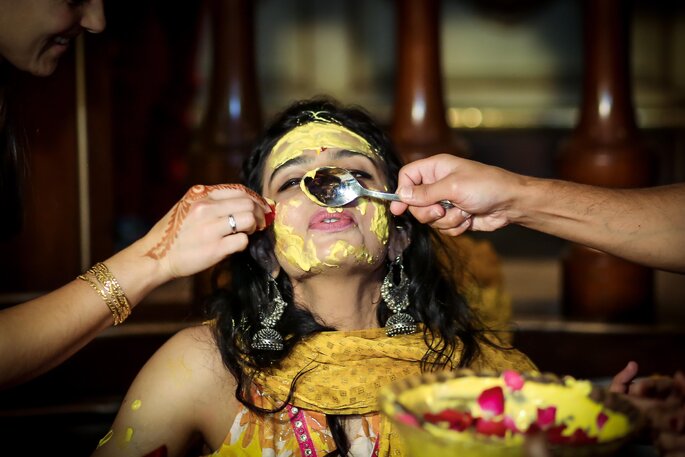 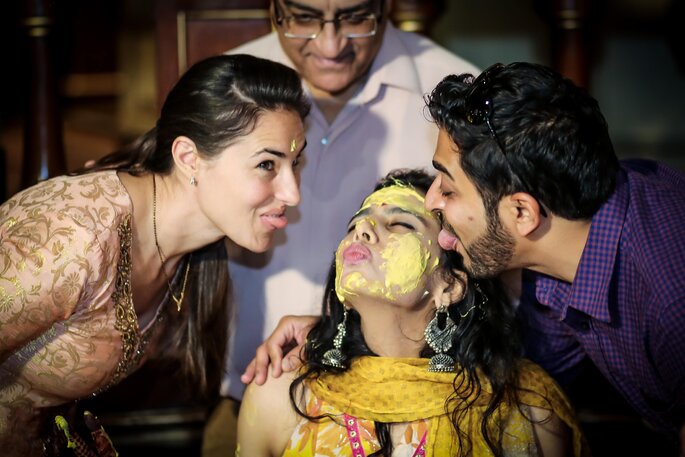 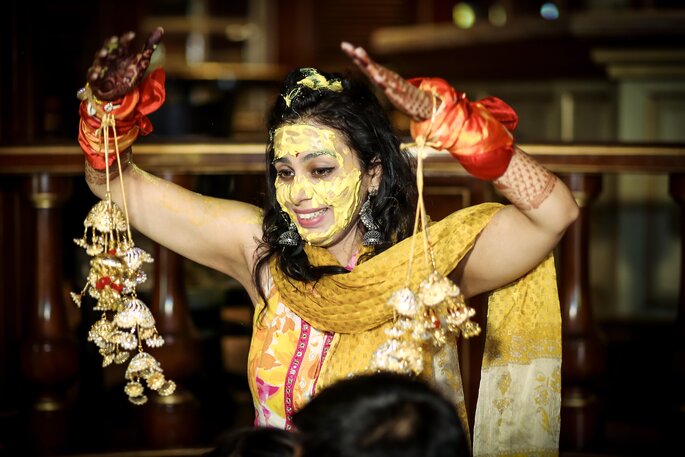 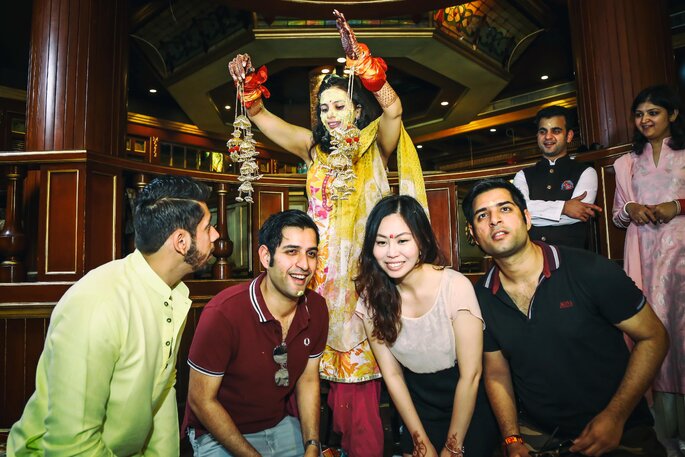 “Since Shray was overseas I kind of had a lot on plate so I obviously selected ideas online and added my own touch of colour choices / fabric choices etc and asked the venue events team to implement it. My wedding outfit and cocktail outfit were my designs which were modified by the designers. I chose unconventional colours for all my functions.”, says the bride. 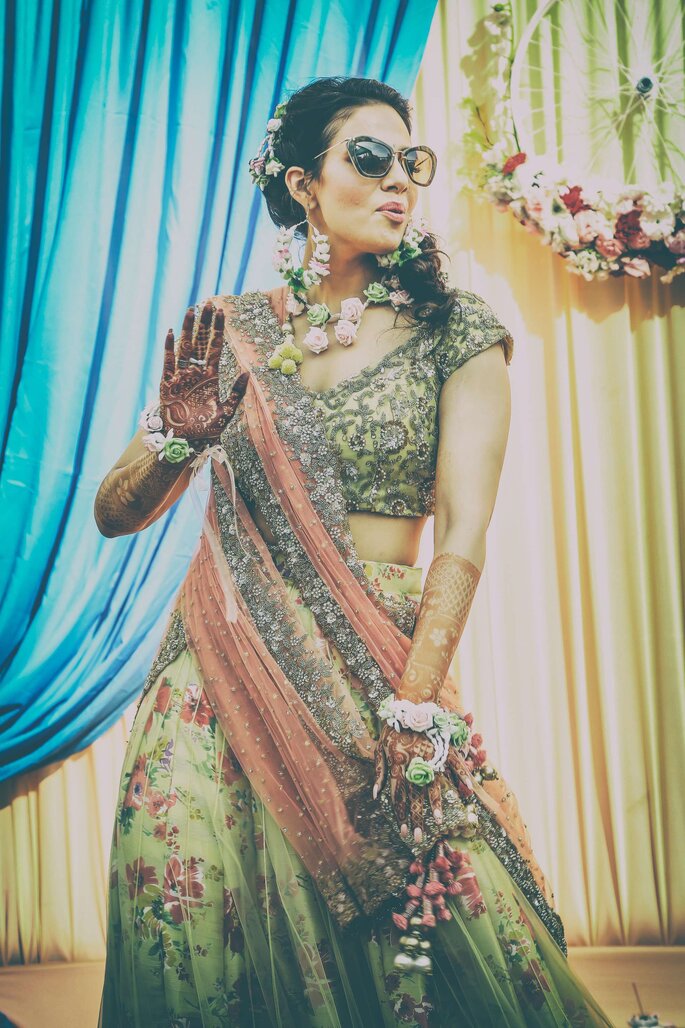 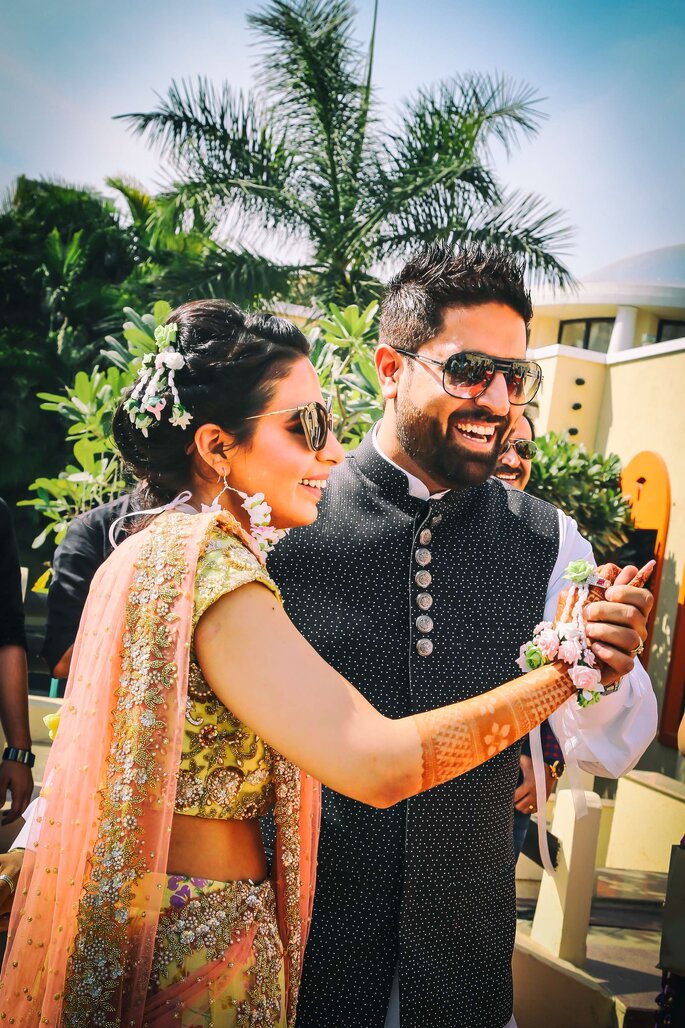 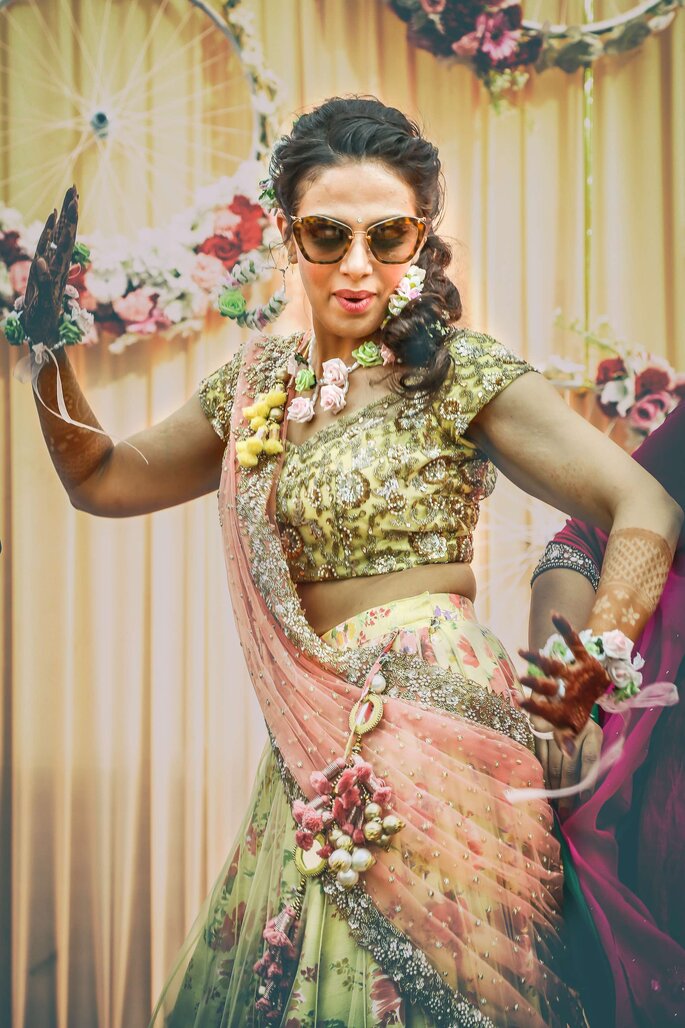 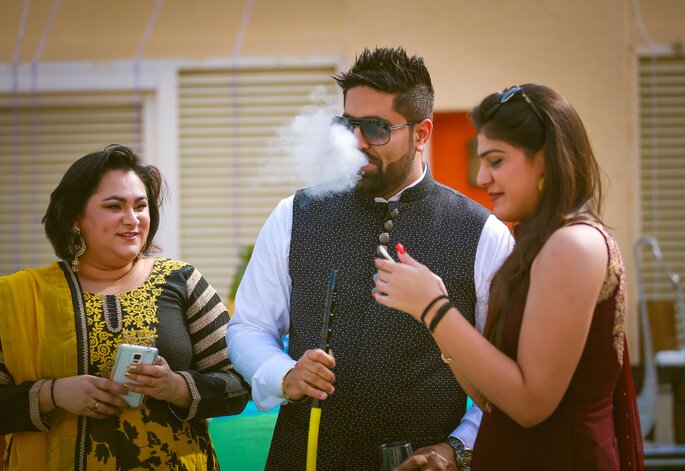 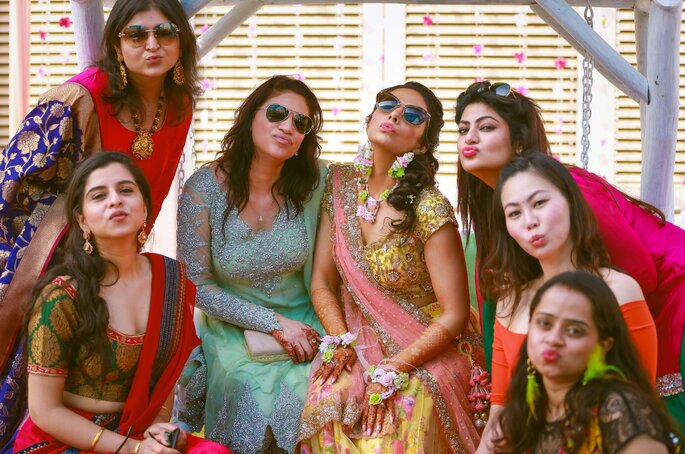 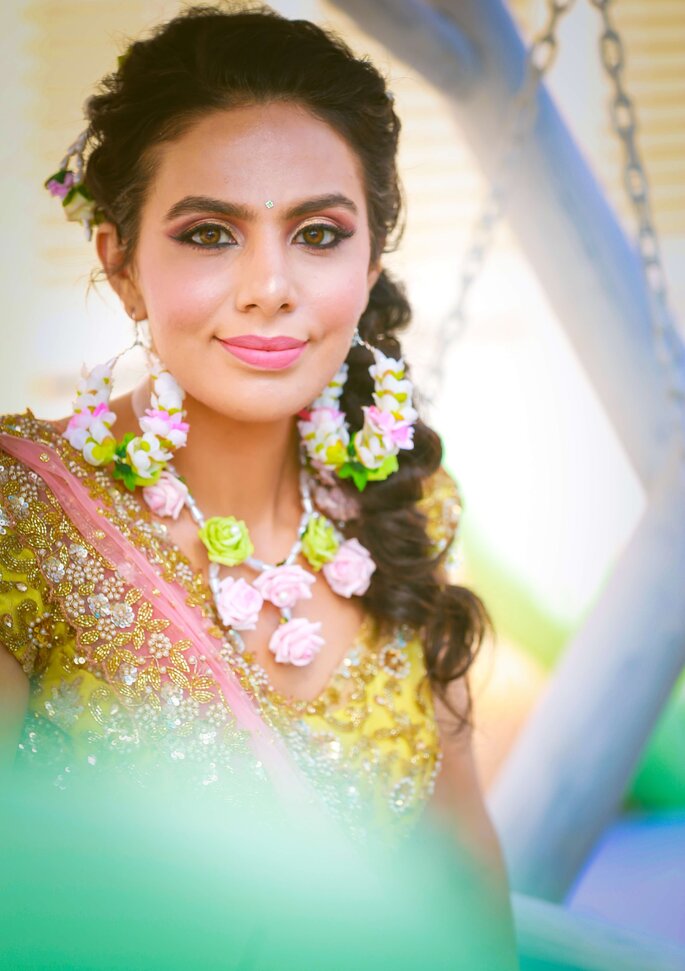 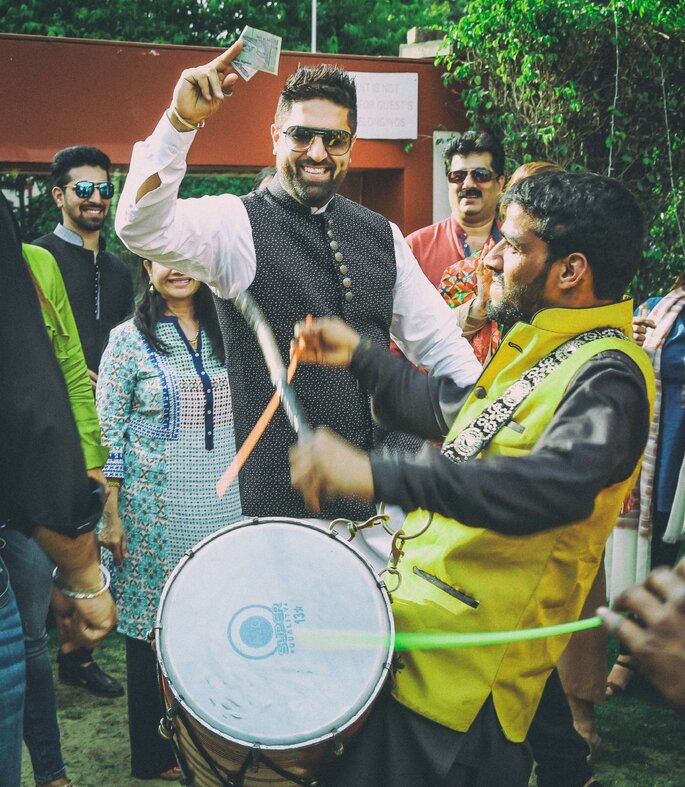 Credits: Happy Frames
“Vendor decisions were through word of mouth and my constant research of their work online. My Mehendi decor and dress code was of the theme  Bollywood with Arabic twist”, says Aanchal.
save 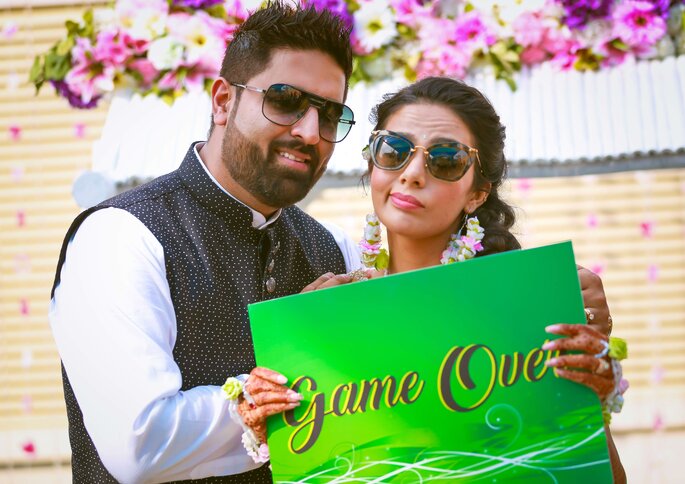 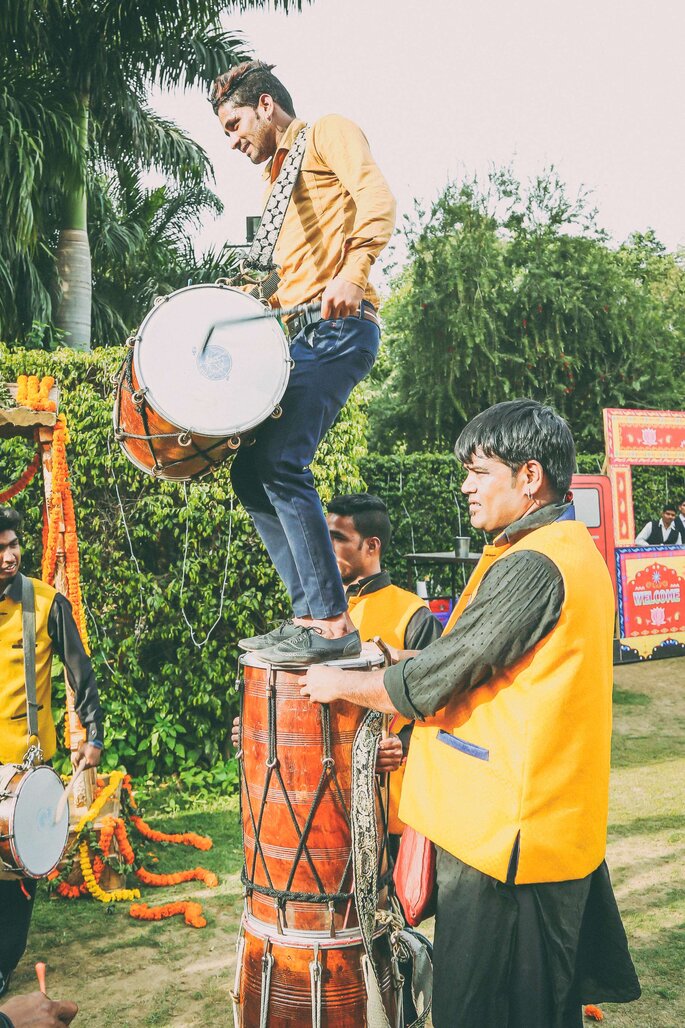 “Wedding day gave me jitters butterflies as I was never going to be addressed as Miss . It was even worse for me as I was going to go miles away leaving my professional career, friends, family, my city rather country and settle in a complete foreign land with not knowing anybody apart from Shray . It was a very emotional day but back of my mind I knew that I’m marrying the best man!”, says Aanchal. 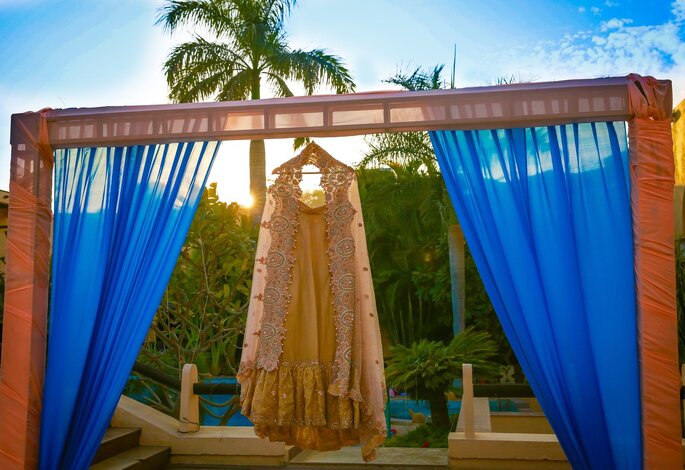 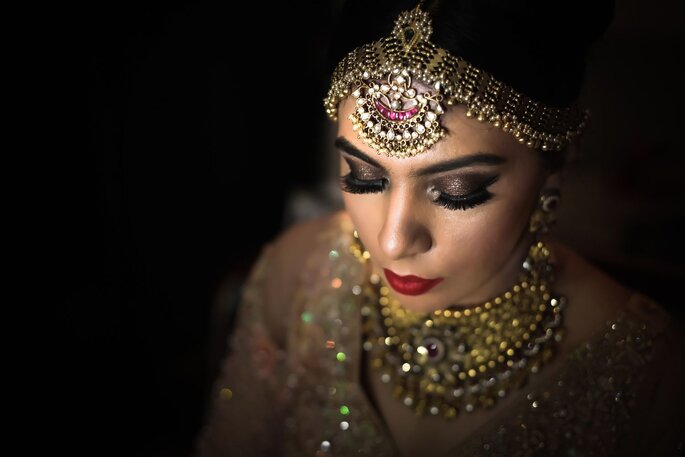 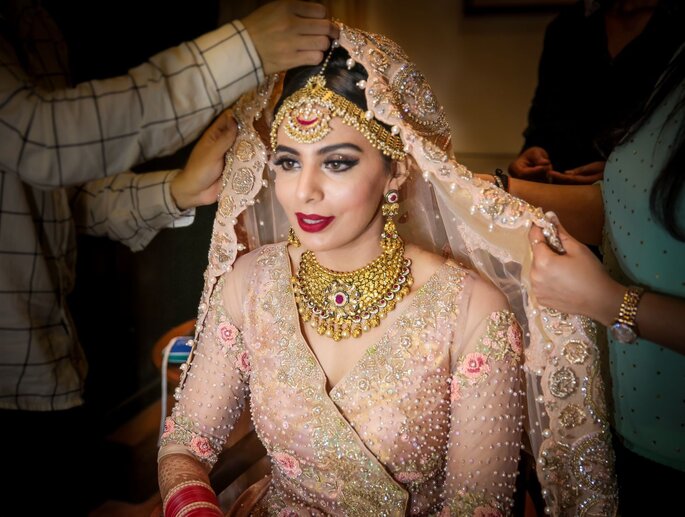 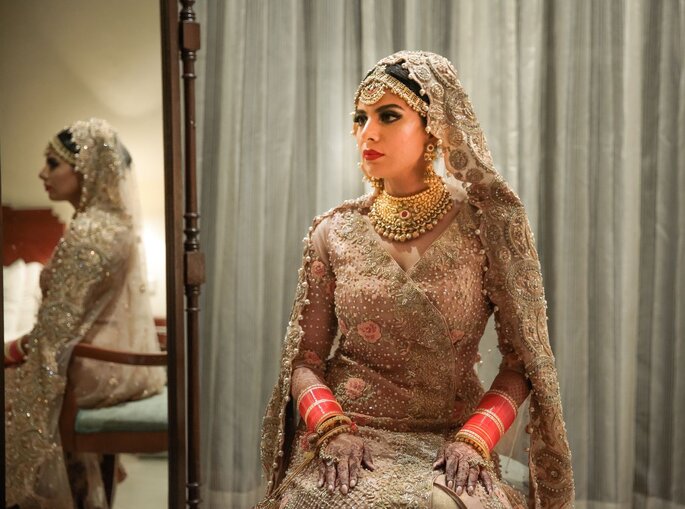 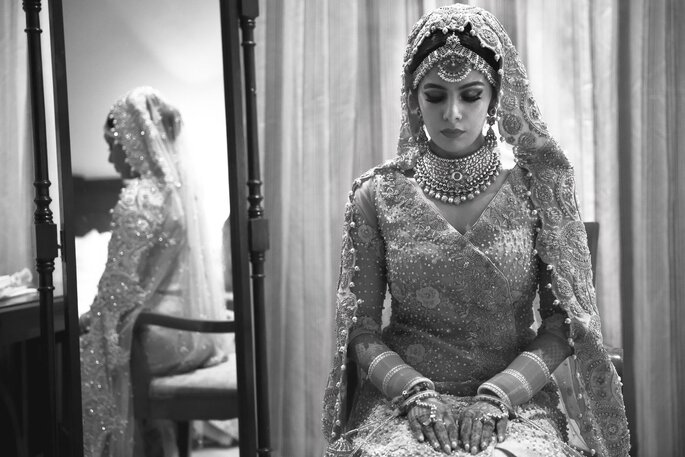 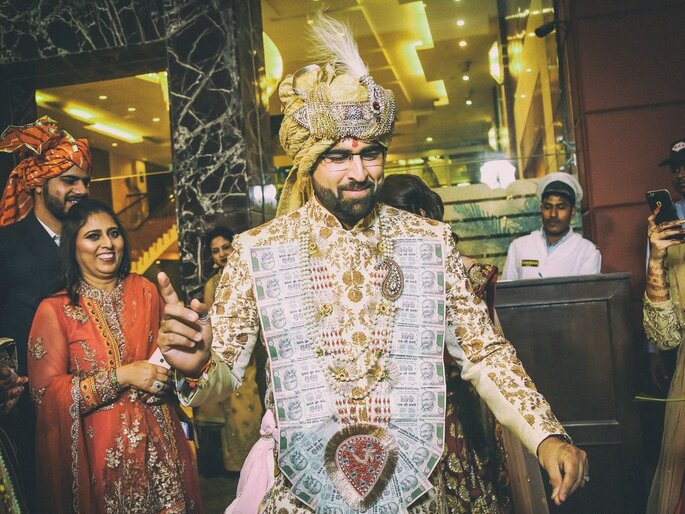 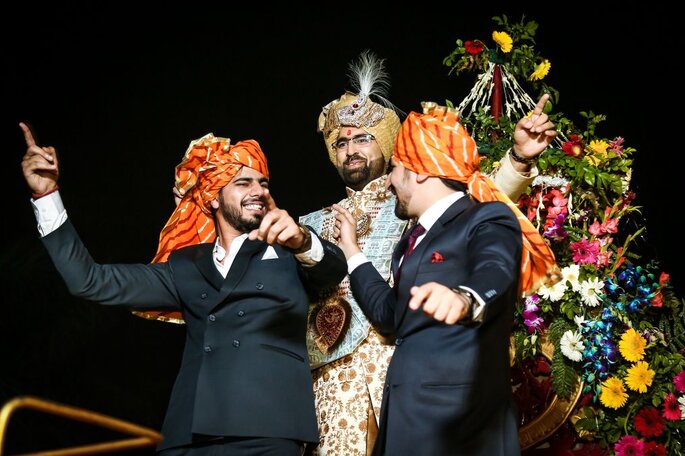 If you want to get featured on Zankyou’s digital magazine, send in your beautiful wedding pictures to vartika.puranik@zankyou.com.

When Social Media Played Cupid For Priya And Mohit

Real weddings
11-Nov-2018
Priya and Mohit first met each other via Orkut. 4-5 years of friendship turned into something special when they first went out on a date.

Real weddings
07-Nov-2018
Pallavi decided to proposed to Karan in the most romantic way ever. After this, there was no looking back. The amazing wedding photography is done by The Knotty Story.

A Gorgeous Bride And A Breathtaking Rustic Wedding Decor

Real weddings
29-Oct-2018
Mailys and Berlin have shown the world that a long distance relationship can still work when people are in love.

Real Wedding Of Rasna And Nannu- From Facebook Friends To Soul Mates!

Real weddings
21-Sep-2018
A popular athlete in school, Naanu, already had a sweet spot for her senior Rasna and never lost an opportunity to Rasna that. Rasna's heart melted when when he sent her the song Soniyo from the Bollywood movie Raaz 3 and she also felt something for him. They went from Facebook friends to soul mates. The Real Wedding Of Rasna And Nannu!

Real weddings
07-Sep-2018
Sandeep and Karishma crossed each other's path when they were working together. Their unusual story of how they got to know each other is quite interesting. If you want to get featured on Zankyou's digital magazine, send in your beautiful wedding pictures to vartika.puranik@zankyou.com

The Wedding Lehenga And Ensemble Priyanka Chopra Could Wear For Her Ceremonies!

Real weddings
22-Aug-2018
We have predicted what Priyanka Chopra could wear on her wedding day but we are hundred percent sure that whatever our desi girl picks, she's going to sweep everyone off their feet.
24

Real weddings
01-Jun-2018
Indian weddings are known for their extravagance, that's a fact. But a celebrity Indian wedding is even more special. In this gallery you can look at the beautiful photos from Gautham Rode and Pankhuri Awasthy's special wedding.

Real weddings
31-May-2018
Weddings being the most special part of a Bridal couple's life need to be extra ordinary! The Real Wedding of Tania and Vaibhav was really glamorous, and loved by everyone! 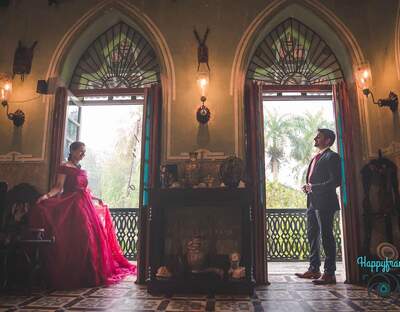